The mankind has used maps for more than 4000 years... But still majority of the world's population does not understand or can’t read maps. Their spatial understanding, navigation and orientation is based solely on local landmarks, especially so in emerging markets.

Every human being on their own territory can instantly identify the most known and biggest landmarks, such as schools, stations, department stores, big buildings, major junctions, and locate themselves and navigate within the area accordingly. This is happening automatically as people's regional understanding and memory is based on the landmarks for which can be seen, named and logically deduced from the surroundings.

“Where are you”: I am in Barmoi Hotel, it is close to Casino Leone. Every person in Sierra Leone in Freetown instantly understands this.

“How to go there”: First pass Casino Leone, turn left at Cape Community School and then go straight until you see Hotel Barmoi.

Locals know these landmarks and all necessary information has been successfully delivered and understood. There is no need for a traditional map or more complex coordinates that most of the locals can’t understand and require plenty of education and special knowledge.

Modern navigation and location technologies are based on maps and coordinates. They are still far too difficult for most people and they can’t deliver the information as they understand it without additional interpretation.

The image above illustrates well why the majority of the world's population still does not understand maps and coordinates – these concepts are not based on what they see and what is real in their own surroundings. Coordinates do not turn automatically into Hotel Barmoi - the basic information to be delivered and understood.

If same information will be delivered by using only landmarks, there is no need for complicated technology to get the point immediately and without additional interpretation:

In the image below where one can see that landmarks are not too far apart, nor too close. They form a complete basis for personal navigation and orientation. 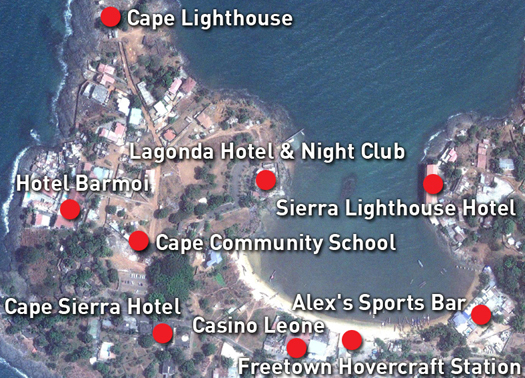 Of course, landmarks are not an alternative for maps and coordinates, but an additional new form of delivering location and navigation information that really bring location services to where they should be: Everyone’s everyday-tool everywhere!